RPG Players and GMs, Add Character to Your Characters! 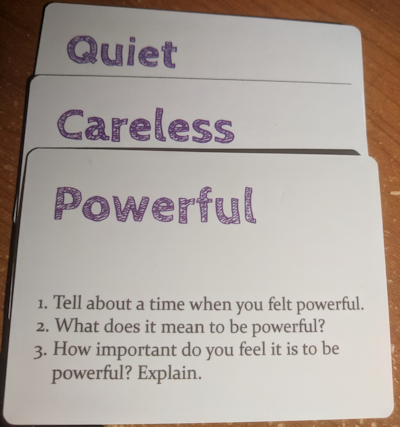 I continue to be amazed at the creative ways that people are using Describe cards and wanted to share one of my own. After many years, I recently returned to role-playing games (RPGs). As a Game Master (GM), it’s my responsibility to help the players experience an interesting story and interact with non-player characters (NPCs) that have depth. (For those not familiar with RPGs, NPCs are all the beings in the imagined world that the players might interact with. The GM has responsibility for portraying all of those NPCs.)

Historically, RPGs and their players have used random tables to generate traits and descriptors of characters and NPCs to stir the creative juices of those playing and provide depth. Anyone who has watched a movie knows that they will probably be more interested in characters that have more than one dimension, who have a backstory, who are relatable.

As a Counselor, Describe has helped me connect with and better understand my clients. I thought, “Wouldn’t it do the same for fictional characters?”  Sure enough, I found that, using Describe, I could quickly “learn” about the NPCs I was generating. For example, by drawing three random cards, I might learn that the NPC is Quiet, Careless, and Powerful. Great grist for the mill in role-playing! To add more depth, I then explore some of the questions on those cards from the NPCs perspective:

By answering these questions from the NPCs perspective, I now know enough to portray them as a fully dimensional being that will be interesting for the players to interact with!

This same approach can work for the players when generating characters. And the method doesn’t have to be random. Sometimes, just looking through the deck for Describe words that seem appropriate for the NPC or character provides the same, effective result.

Have you used Describe cards as part of your RPG experience?  I’d love to hear from you!

P.S. If you’re a GM looking for other great tools and resources for running an RPG, I highly recommend Roleplaying Tips by Johnn Four. Johnn regularly offers tips, tidbits, and publications that have made it much easier for me to get back into RPGs after all this time.

Find out more about Describe Cards.